Enjoy the music of Syd Barrett, in Paris, this September

The electronic music festival “Couleurs d’Automne” (Autumn Colours) which takes place between September 17th and September 27th at the Aleph Theatre in Ivry-sur-Seine (which is a suburb of Paris) is organising four concerts of Syd Barrett’s music, two on the 17th and two on the 18th. The organiser, an association called CLSI, is presenting two concerts of Syd’s instrumental music and two concerts of his songs.

Pieces like Rhamadan, Lanky, Late Night, Golden Hair and Silas Lang in their instrumental versions, as recorded by Syd and friends, are being remixed and spatialized over 24 loudspeakers surrounding the public. The idea is to keep Syd’s playing of his music intact but to add a “live electronic” element to our performances that brings the sound world of the 60s into the year 2020.

17 of Syd’s songs are being performed in unusual cover versions played by a duo called “La Quantité Discrète” (The Discrete Quantity) whose members are a baritone voice singer accompanied by viola de gamba (originally a baroque music instrument), but here, in these cover versions, is transformed so thoroughly with electronics to sound more like a strange electric guitar, not unlike what Syd did to the electric guitar by his use of the Echorec for “live electronic” transformations.

In the festival Autumn Colours , there is a previously unheard of encounter between the world of avant-garde contemporary classical music with that of Syd’s avant-garde “psychedelic” rock music. 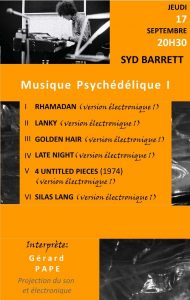 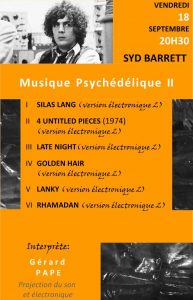 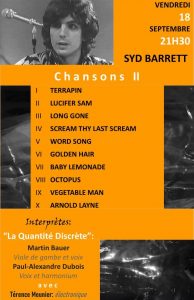 To buy tickets for the Syd concerts, please follow this link: https://www.digitick.com/tour/festival-couleurs-d-automne