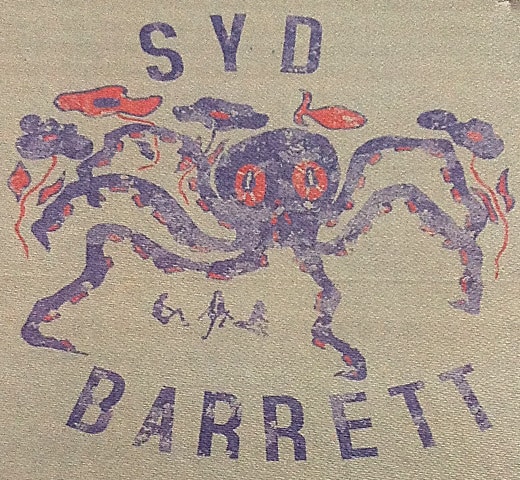 Transcribed from Track 7 of The Madcap Laughs but see note on the right (para.5) regarding the spelling of 'madcap' or 'madcat':

Isn’t it good to be lost in the wood
Isn’t it bad so quiet there, in the wood
It meant even less to me than I thought
With a honey plough of yellow prickly seeds
Clover honey pots and mystic shining feed
Well, the madcap laughed at the man on the border
Hey ho, Huff the Talbot
"Cheat" he cried shouting kangaroo
"It’s true" in their tree they cried
Please leave us here
Close our eyes to the octopus ride

Please leave us here
Close our eyes to the octopus ride

The madcap laughed at the man on the border
Hey ho, Huff the Talbot
The winds they blew and the leaves should wag
They’ll never put me in their bag
The seas will reach and always seep
So high you go, so low you creep
The wind it blows in tropical heat
The drones they throng on mossy seats
The squeaking door will always squeak
Two up, two down will never meet
So merrily trip and go my side
Please leave us here
Close our eyes to the Octopus ride'

CLOWNS & JUGGLERS
Transcribed from Track 2 on 'Opel'
Included for comparison with above:

The first single by Syd Barrett as a solo artist was released on 14 November 1969, two months before the release of ‘The Madcap Laughs’. It remains a remarkable song in so many dimensions. The lyrics and imagery. The inspiration it borrows. The rhythm.

Syd was pleased with his song: “I carried that about in my head for about six months before I actually wrote it so maybe that’s why it came out so well. The idea was like those number songs like ‘Green Grow the Rushes O’, where you have, say, twelve lines each related to the next and an overall theme. It’s like a fool-proof combination of lyrics, really, and then the chorus comes in and changes the tempo but holds the whole thing together.”

With a first studio recording made on July 20 1968, under the name ‘Clowns and Jugglers’, it seems that those ‘six months before’ refers to the first half of 1968  – possibly even including late 1967, since a first recording may have been attempted in May 1968. This means that the song was written during the period of parting with Pink Floyd, including the brief ‘five man Floyd’ experiment and also the time when Syd waited on the band outside the studio and even took to following them around England in his car to gigs they played: A desperate time which may well have inspired some of the lyrics.

Thematically the song seems connected with fairgrounds and different rides. The Octopus was indeed the name of a ride which was popular in Cambridge at the fair on Midsummer Common. What we can learn is that the lyrics of the song had inspiration from many places. Syd was indeed something of a collage artist, and Octopus is probably the best example in his music, among several others.

The Octopus lyrics in turn are widely quoted and used. His début album was named after a line in this song, possibly misheard as he seems to sing ‘the mad cat laughs’. Julian Palacios’ book ‘Lost In The Wood’ and Swedish tribute band Men On The Border are two other examples.

The first recorded version, from 1968, was revived the following year and fellow UFO musicians Soft Machine were asked to provide full band instrumentation on top of Syd’s demo recording. This version is available on the album ‘Opel’.

On June 12-13, 1969, Syd started his collaboration with David Gilmour to complete his first solo album. Takes 1 and 2 are available as bonus tracks, while take 11 is the one finally used for the album. A new 2010 mix was included on ‘An Introduction To Syd Barrett’. Lots to choose from then! And to add to the menu there is also the world of bootlegs. David Gilmour and Jerry Shirley played the song live with Syd at a one off gig in June 1970. Octopus was the fourth and final song of a surprisingly short set, which ended when Syd abruptly put down his guitar and walked off stage even before the song was finished.

Octopus. A song of no compromises.

Album releases: 'The Madcap Laughs', 'Wouldn't You Miss Me' and 'An Introduction To Syd Barrett'