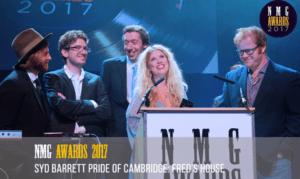 We are delighted to announce that 2017 winner of the Syd Barrett Pride of Cambridge Award is the indie folk rock band Fred’s House.  The award was presented by Syd’s sister, Rosemary Breen, at the annual NMG Awards event, which took place in Cambridge in August 2017.

Fred’s House’s “were over the moon to win such a prestigious award and be presented it by Syd’s sister.”  They went onto say that “It’s so wonderful that Syd’s family are still very much part of the music scene in Cambridge that was responsible for producing one of the greatest bands ever. We have been working hard on Fred’s House for 7 years now and this award was a lovely recognition of our hard work and everything we’ve created as a band. We are very proud indeed.”