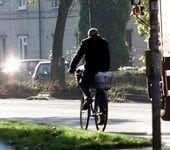 I've got a bike, you can ride it if you like.
It's got a basket, a bell that rings
And things to make it look good.
I'd give it to you if I could, but I borrowed it.

I've got a cloak it's a bit of a joke.
There's a tear up the front. It's red and black.
I've had it for months.
If you think it could look good, then I guess it should.

I know a mouse, and he hasn't got a house.
I don't know why I call him Gerald.
He's getting rather old, but he's a good mouse.

I know a room full of musical tunes.
Some rhyme, some ching, most of them are clockwork.
Let's go into the other room and make them work.

As Bike closes The Piper At The Gates Of Dawn, it also opens the door quite literally to a room full of musical tunes.

The song Bike did indeed stem from that room in Syd’s mind, where hundreds of tunes swam about and at one precious point in time could be pulled out, seemingly like rabbits from a magicians hat, effortlessly.

However, Bike is also the song that closes one chapter in the timeline of Pink Floyd recordings and opens the next. The opening of that door to “the other room” can be seen to signify the change in Syd’s creative genius, when one looks at what preceded it and what came after. 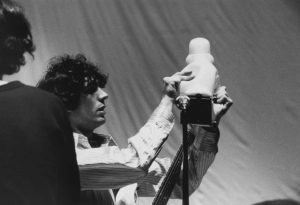 From the release of See Emily Play and the finishing touches to the debut album, including the segment known as Sunshine, in June of 1967, there is a world of difference to what followed on the shadow side in August and later that year. Merely a few days after the “Piper” release, in early August, Pink Floyd rush-recorded Syd’s Scream Thy Last Scream – with Syd in a bad state and not doing the vocals. This change is what lay on the other side of Bike. That room of noise entered in Bike, a foreboding of what can be found on “the dark side”.

The cacophony in that room, half of the length of the song, is a rare piece of musique concrète in popular music. A collage of oscillators, clocks, gongs, bells, a violin, and other sounds. The piece fades out with a tape loop of the band members laughing reversed and played at double speed. A kind of madcap laughing, to return on Vegetable Man and in the naming of Syd’s solo debut and as a background on The Dark Side of the Moon.

The lyrics speak of showing a girl a borrowed bike, a damaged cloak, a homeless mouse that is called Gerald, and a clan of gingerbread men. All because she fits in with this world. Under it all, a love song. The origins of the song can be traced back to 1965 and it was his girlfriend Jenny Spires that was the inspiration. The letter in which it is mentioned opened the V&A exhibition on Pink Floyd. The song back in 1965 was not completed in its final form, but more of a little acoustic ditty. Syd’s friend Andrew Rawlinson also remembers Syd playing it in the back garden of Roger Waters’ house on Rock Road in Cambridge. 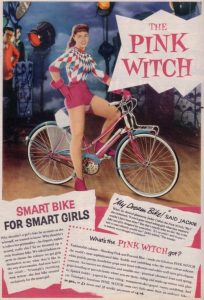 We only know of one live performance of the song. It was included in the pivotal concert Games For May on May 12, 1967. Possibly this was the only time. Disc & Music Echo heralded Pink Floyd as “the first pop group to appear at London’s swank new Queen Elizabeth Hall, which opened a couple of months ago beside the Festival Hall on the Thames South Bank”. Peter Jenner explained at the time that they “hoped to present a show of completely new material with tapes and films”. For Bike, Julian Palacios writes that a bicycle was “mounted with contact microphones to pick up the sounds of its rotating gears and ringing bell. Two mechanical toy ducks, mounted atop Plexiglas cabinets stage-front, quacked during the song’s coda”.

Soon thereafter, on May 21, the song was recorded for posterity and at 50 years old, it still stands out as a unique creation with very few others to match it.

Syd carried a love for bikes through his life. In his later years there are plenty of photos which document his shopping trips on bike. And there are stories of his early bikes, one which was a Pink Witch – a very popular bike for girls at one time. They were made in turquoise and bright pink, but according to his girlfriend Libby Gausden his was in turquoise. It is a fitting tribute to both Syd and his home town Cambridge that the art installation at the Cambridge Corn Exchange in October 2016 was centered around a sort of psychedelic bike wheel.

As it happens, the last known photo of Syd, from a series taken on a distance, shows him on a bike riding into a reflected sun. Although these kind of photos in general are not worthy of any attention, this particular one holds a certain relevance and strong sentimental value.

A bike borrowed. A life on borrowed time. True for us all.

I Never Lied to You
Scroll to top