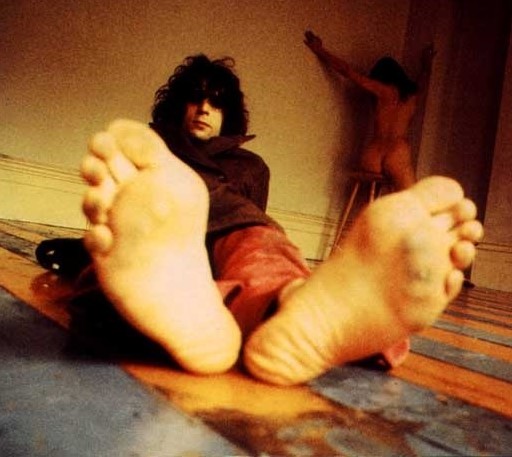 It's no good trying to place your hand
Where I can't see because I understand
That you're different from me
Yes, I can tell
That you can't be what you pretend

It's no good trying to hold your love
Where I can't see because I understand
That you're different from me
Yes, I can tell
That you can't be what you pretend

It's no good holding your sequin fan
Where I can't see because I understand
That you're different from me
Yes, I can tell
That you can't be what you pretend

Yes, you're spinning around
And around in a car
With electric lights
Flashing very fast 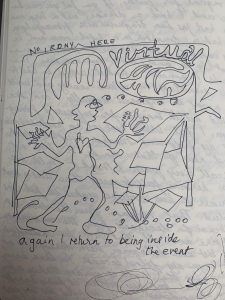 "No Good Trying" is one of those very rare songs that I can remember the first time I heard it. In the early 1990s, I had moved to London from Brighton and managed to find myself a ridiculously cheap studio underneath the Museum Book Shop opposite the British Museum. Effectively the bookshop owner, Ashley Jones, was subletting storage space. It was no frills but a lick of gloss yellow paint around the fireplace and a brick-red floor soon made it more cheerful. That was in the room I shared with Jet Boy (Patrick Welch) who introduced me to a whole swathe of music I had previously only encountered from afar like the cool kids at the school disco seen across the floor of the church hall. Patrick had a patience and determination about him that allowed us to immerse ourselves in music that might, on the surface seem unrewarding to the casual listener. In order to keep the rent as cheap as possible, I had to find another artist or illustrator to take the space in the room next to ours. This was a tricky task as although the room was larger there was no natural light just buzzing strip lights. The windows were there but boarded up and had you un-boarded them the view would have been underneath the road of Great Russell Street. Enter Steve (Major Talent) Fishman a towering bass player from LA with a cv that included playing bass for Paul McCartney, Roy Orbison and as part of the house band on The Jonathan Ross Show. Steve loved English music and although I was still really planning to become an illustrator at this point he soon began to encourage me in my music making, which had found a new lease of life through a certain feeling of Englishness that permeated the air around the band I was in, David Devant and his Spirit Wife. I think Steve’s American otherness and enthusiasm for the lyrical absurdism in both my art and music, made me more aware of how important this specifically English way of creating was. 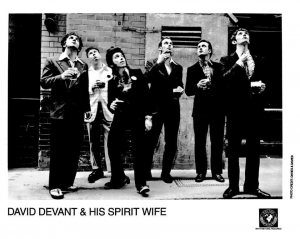 I’ve had hearing loss all my life and so to really hear music I need time and space. It was in Steve’s basement studio (pictured on the inside of the DD&HSW LP Power Words for better Living) that I managed to listen to The Madcap Laughs at sufficient volume for it to trigger felt intensities. Going into Steve’s room was a bit like going into your parents’ bedroom complete with stumbling across bumper packs of multi-coloured condoms under a desk. The floor was freshly carpeted with a giant roll of red paisley carpet Steve had salvaged from The Dominion Theatre around the corner and the walls were entirely covered with shiny silver mirror tape. It was in this underworld realm of grimy otherness that the rug was pulled from under my feet by "It’s No Good Trying". Syd’s painted floorboards on the cover of the album entangled with the temporal substance of Steve’s customised and somewhat seedy chamber of wonder. Whilst this may all seem to be a rambling unnecessary digression I suppose this is the point. I have come to feel like Syd Barrett’s music helped me place myself in the realm of wonder that is a digression, which honours the specificity of real-life emergence. So my real experience of the music in an actual place is part of the song’s cosmic entanglement. Although taxonomies and ratified theories around music can be engaging there really is no truth other than the actual occasion. This is why I believe that album felt like a shudder from the realm of felt intensities. "No Good Trying" is perhaps the song I associate most strongly with my extra-embodied feeling of bafflement through encountering music that was instantly engaging but at the same time completely sidestepped the rules about what made something that one could judge as being of a good pop standard. Syd’s region of temporal substance is still the creative space I value above all others. It has taken me a lifetime to recognise how the separation of real-life encounters from the conceptual ideas of things is not where I want to place reality. A cut-up vernacular is what I associate with that peculiar Englishness Syd’s music transmitted. It’s not a jingoistic conceptualised idea of national identity but instead the real of an organism taking everything in the region and making it matter for expression. Syd’s use of childhood rhymes and snippets in his art and music has this sense of material agency that I crave. Rather than making a semiotic puzzle, it’s more like how a hoarder is attuned to the non-linguistic frequencies of objects. I can’t help but relate this entangled sense of material agency to Syd’s suggestion that he felt he didn’t need to paint because his neighbour was having success with painting. It’s a whole other discussion to speculate about how the music industry encourages a competing separation that requires confidence to survive if you wish to maintain creativity as something emergent and entangled.

So when I heard the song loud enough to feel it through the large speakers in Steve’s basement studio, there was this sense that it felt completely other and yet completely of my world. This confused me and my cognitive brain started to ask questions like, is this cool to like? Is this deliberately weird? Is it the work of a madman as the title suggests? I mean, I knew "See Emily Play" and "Arnold Lane" and although there is a feeling of the weird within these songs, they have a much more easily located sense of pop. There was a disruption of normal ways of perceiving that some might connect to drug use but I prefer to experience it as an intuitive understanding of life as felt intensities. So whilst other avant-garde music may interrupt habitual cliché with a more strategic form of disruption and cut-up this only creates an opening onto the cosmos of feeling that Syd was operating inside. In this place, the pleasure of melody and word as vital matter is fully activated in much the same way that Bob Dylan, an artist Syd Barrett greatly admired, transmits the meaning inside the event of the song. I can’t think of any other music that has had this trance-formative effect on me. For a start, I could hear exactly what was happening in the record instrumentally but it still seemed to be from somewhere apart that was inside that basement room.

So even though Syd Barrett’s contingent approach to sound has become influential the wonder was not a technically innovative thing. Very soon after hearing the song, I wrote "I Think About You". It seems strange that this found its way onto our first album because it was so different to how I had been making songs up until then. In the end, the swagger of "I Think About You" sounds a far cry from the gently unsettling swoon of "No Good Trying" but years later I read how Syd had been into Bo Diddley and this Diddley rhythm was always the reference point Foz, our guitarist, would use to keep us in time. Strangely enough, this elastic temporal approach in Syd’s music is something I enjoy but is not easily assimilated into “professional” ideas of making music. Quite a famous producer who is now sadly dead asked me if the demo I sent him was a joke because I had played the drum machine by hand in a fluctuating beat. The producer was from an esteemed avant-garde group and yet he wanted something in time - this schism in approaches stayed with me. Now I think I’m happy valuing the entangled experience of temporal substance* in specific personal experience above the convenience of communicated ideas. "No Good Trying" – I’m not even gonna try?

Musician and artist Mikey Georgeson is perhaps best known for his time in the late ’90s and early ’00s as the frontman of art rock band David Devant & His Spirit Wife. Georgeson performs as The Vessel, through which English stage magician David Devant would supposedly express himself. The Vessel told Brighton’s Punter magazine: "It's quite simple really, as a magician Devant didn't really fulfil himself so he said 'I shall walk down the corridors of contemporary music', so he chose us. I am his vessel." As The Vessel, Mikey was once sawn in half by spectral roadies and on another occasion fired from a cannon, appearing at the opposite end of the Duke of York’s cinema, clothes tattered, and face blackened from the explosion. Mikey is a Doctor in Fine art and has recently developed a line in performative keynote speeches as a mythopoeic figure Professor Kimey Peckpo. The latest David Devant and his Spirit Wife Lp is at www.cutoutandkeepme.com and his new solo LP is at www.mrmikey.net

Lee Here I Go by Lee Harris, co-founder of the Saucerful of Secrets
Scroll to top